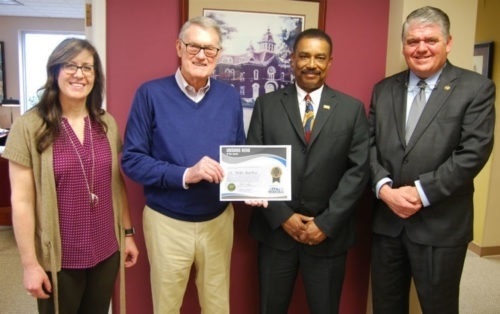 From left, Ashley Guthrie and Don Scott of Don Scott Insurance in Lebanon, present Det. Mike Barbee with their inaugural Unsung Hero of the Month Award. Wilson County Sheriff Robert Bryan, right, said, “Detective Mike Barbee is a great example of an unsung hero who comes in to work every day and takes great pride in his duties and attention to detail. His selfless service to this community has been instrumental for this office in developing a great relationship with our citizens.” Barbee served 16 years with the Lebanon Police Department, including six months in 1992 as interim chief of police, which made him Lebanon’s first African-American police chief. He joined the Wilson County Sheriff’s Office as the first internal investigator for the corrections facility and has been a detective with the force for eight years.