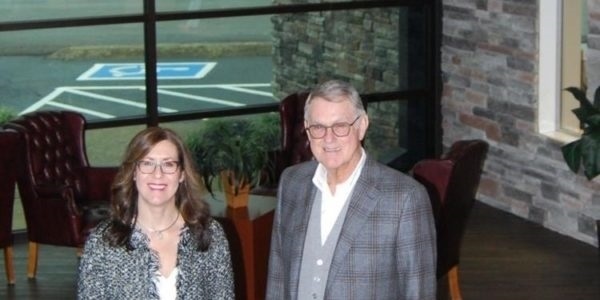 A seven-month makeover has produced a refreshing transformation in the Don Scott Insurance building at 1102 W. Main St. in Lebanon.

“The renovation includes a complete new facade on the front of the building. We’ve upgraded the siding and the rest of the building to bring it more up to date and more energy efficient,” Scott said.

Sharing a bit of history behind the structure, he added, “Originally, this was a Minnie Pearl’s Fried Chicken restaurant. After that it was a Mister Chicken, a Fidelity Federal Savings and Loan, and then First Southern Bank.”

Guthrie said, “This has transformed the old look of Minnie Pearl’s Chicken into a modernized building. I hope it will bring new life to our corner of West Main Street.”

The independent insurance agency will hold an open house on Friday, Nov. 16 from 4-6 p.m. to show off the new look. Folks are welcome to drop by and take a look around and partake in fried chicken and sweet iced tea.

Scott, who moved into the building in 1990 and promptly sold the vintage drive-in window, said,

“You wouldn’t know a kitchen had been in here, but there was a time when a Mrs. Winners (another fried-chicken restaurant) was two doors away, and when the wind was blowing the smell would saturate the building.”

“Cliff Carey and Cliff Jr. We call them ‘the two Cliffs.’ They’ve done a great job,” said Scott, a native of Johnston, S.C., who earned a business management degree from Florida State and has been in the insurance business for 45 years.

The Scott family moved to Wilson County in 1973.

“We were living in Greensboro, N.C., and the company I worked for wanted me to move to Middle Tennessee to be a territorial manager,” said Scott. “We moved into west Wilson County and then I came into the agency business. Jean, my wife, became a teacher at Highland Heights Elementary and later taught at Lebanon High School, where she retired.”

Guthrie, a 1999 graduate of Lebanon High School, received a bachelor’s degree of fine arts in graphic design at Middle Tennessee State University. She joined the agency eight years ago after working for J&A Partners, a Nashville advertising agency.

She said she decided to switch careers because, “I’ve always wanted to own my own business and felt like it would be a missed opportunity if I didn’t take a look at the family business. It’s been better than I imagined it would be.”

Summarizing their company’s values, Scott said, “We endeavor to place our clients first and best interests ahead of our own in protecting their assets, their homes, their cars and their businesses.”

For more information about Don Scott Insurance, call (615) 444-3620 or go online to donscottins.com.