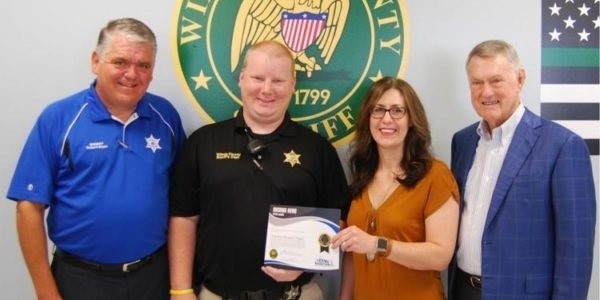 From right, Don Scott and Ashley Scott Guthrie of Don Scott Insurance in Lebanon present Wilson County Sheriff’s Office Deputy Michael Dyce with the Unsung Hero of the Month Award for August as witnessed by Sheriff Robert Bryan. Dyce, a 2010 Wilson Central High School graduate, has been with the sheriff’s office for more than five years. “Deputy Michael Dyce currently works on first shift in our correctional facility as a classification officer. He has proven to be very dependable through his ability to display great rapport with the officers he works with and his interactions with inmates who are housed daily at our facility, which is very essential,” Bryan said. “He consistently volunteers to work on his regular days off when needed and does what is asked of him with no complaint.”