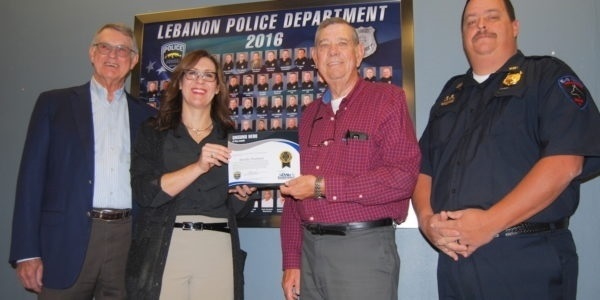 From left, Don Scott and Ashley Scott Guthrie of Don Scott Insurance present Lebanon Police Department evidence technician Randy Trammel the Unsung Hero of the Month award for October as witnessed by Chief of Police Mike Justice. Trammel, a product of Lebanon High School, has served on the force for 36 years and was police chief from 2001-2003. Chief Justice said, “Randy Trammel started his lifelong public service career in August 1979, and he worked his way through the ranks of the police department, eventually earning the rank of chief of the department in January 2001. As chief of police he was known by many including myself as being a firm leader but someone that always took the extra step to make sure you knew you were appreciated as an employee. Chief Trammel is and has been for decades a dedicated, trustworthy and caring public servant.”